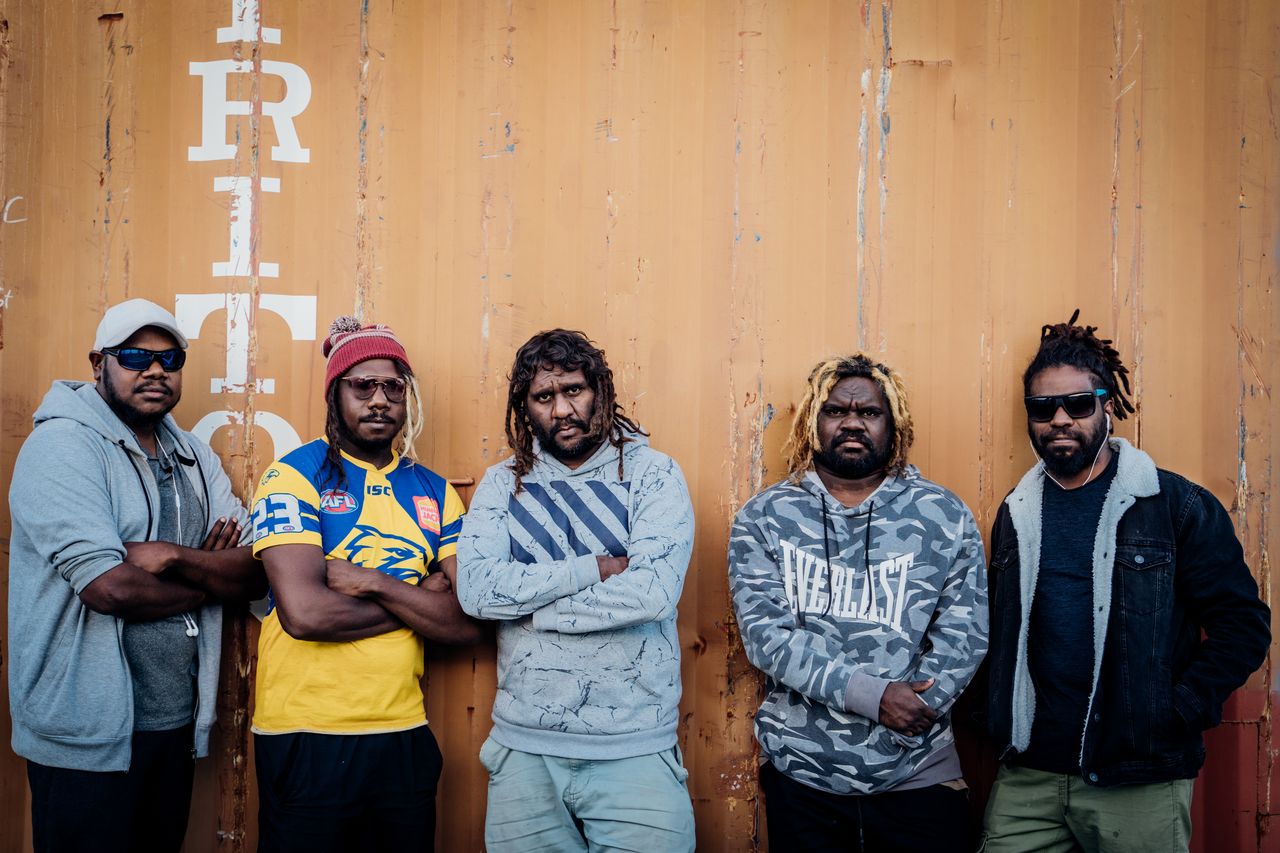 Docker River Band is led by Anangu man Roy Jugadai who is an accomplished guitarist and singer-songwriter from the remote community of Kaltukatjara (Docker River) close to the border of NT and WA, 230kms west of Uluru (APY Lands). The DRB has been honing their dynamic desert reggae musical style for years, a fresh sound often found in the Central Desert region of Australia. DRB play original songs and sing in Pitjantjatjara language, they are a tight band and combine dreamy vocals with impressive keyboard riffs and solid bass and drums. 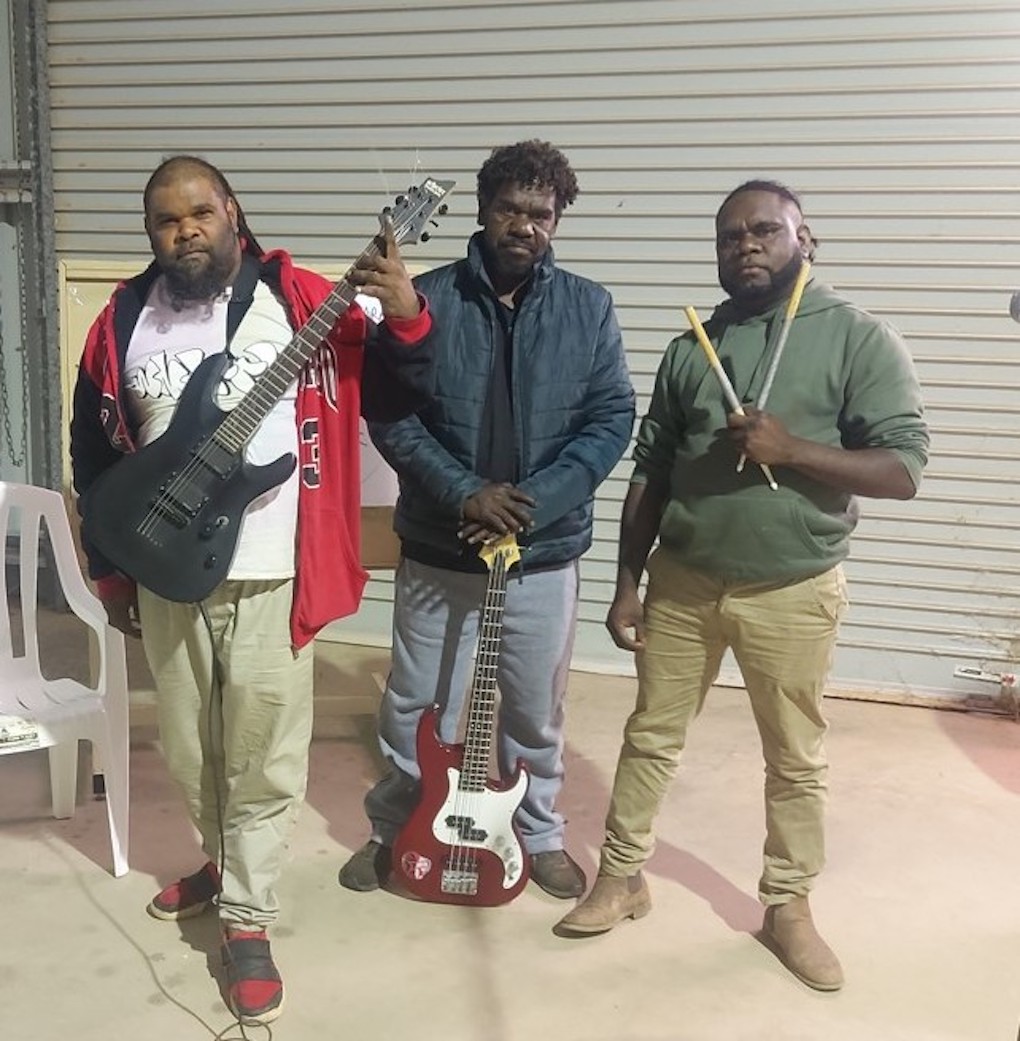 Mr. J Whiskey Trio is a desert metal and rock, Law and Culture band with members from Indulkana and Papunya. It all began at Black Wreath Studios where Jeremy Whiskey decided that he needed to put a band together to play his newly recorded tracks to a live audience. That's when Sammy Inkamala and Steven Brumby joined Mr J Whiskey to make the band what it is today! Since then, they have played a number of shows such as the 2021 Adelaide Fringe. 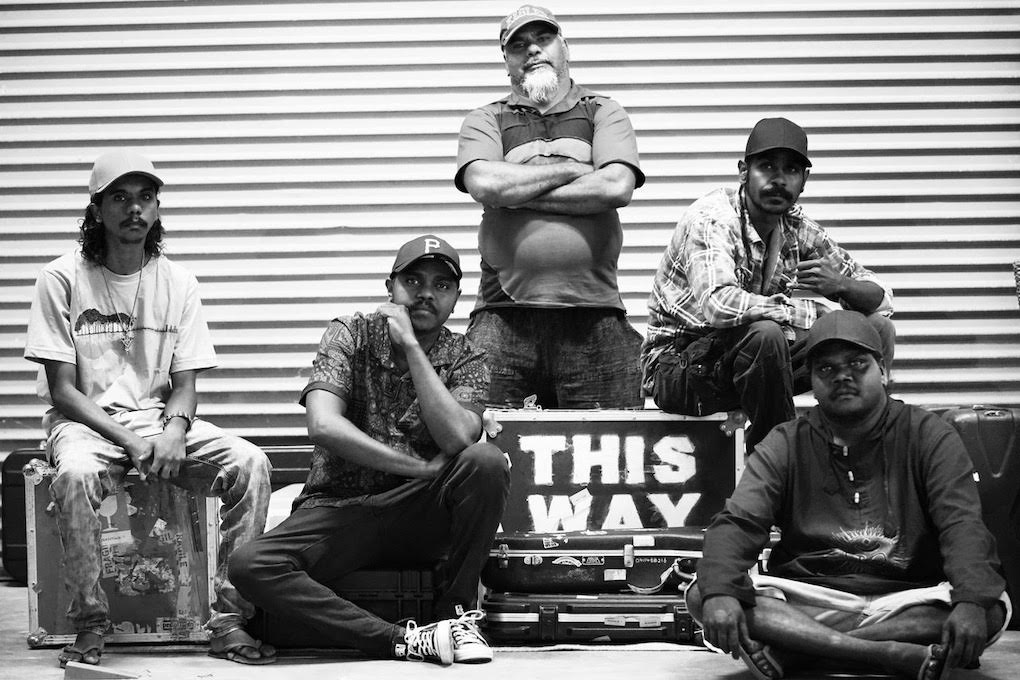 Wildfire Manwurrk (formally KK Band) are talented family of musicians from the Stone Country of western Arnhem Land, Northern Territory. This iconic hard rock and roll band sing in critically endangered languages Kune, Dalabon and Rembarrnga and write music that traverses ancient cultural songlines and stories, through to heavy punk tracks. Their message is a powerful, spiritual, political call to arms to come together to break down the 'brick wall' that stands between the past and the future. Wildfire Manwurrk are exactly as their name suggests, a wildfire that is growing rapidly, taking both their ancient and contemporary stories to the world! 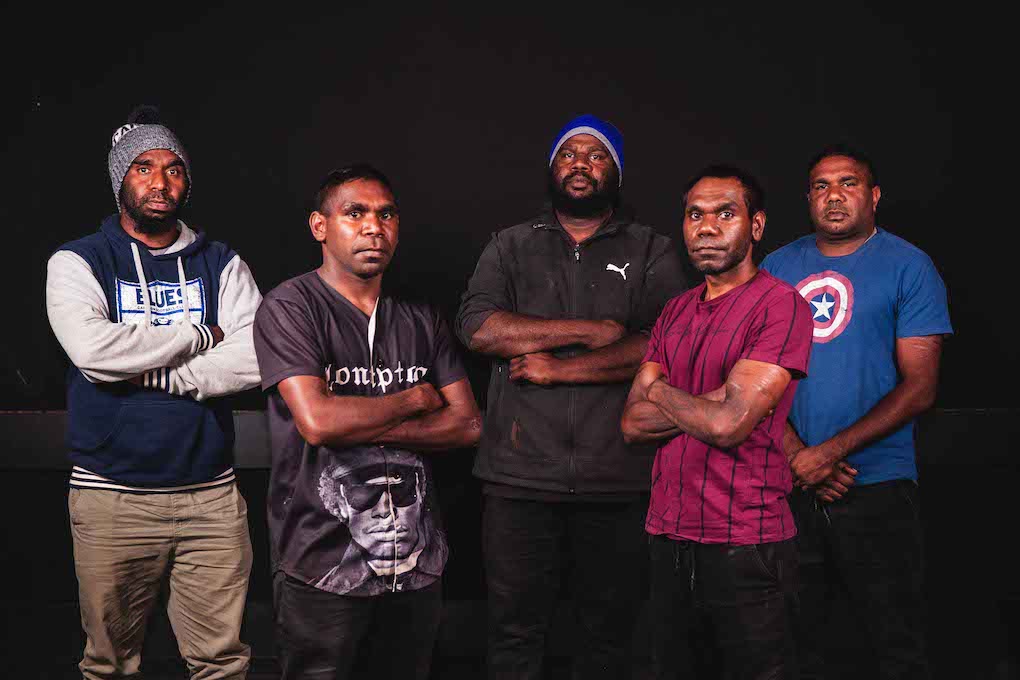 Eastern Arrernte Band are a young desert reggae band emerging from the community of Lyentye Apurte/Santa Teresa, 80 km from Alice Springs. Singing in both English and Eastern Arrernte, their songs revolve around place, country with a strong sense of self and personal identity, tackling issues of loneliness, incarceration, and youth issues. With deep vocals and great riffs, combined with a classic double keyboard reggae vibe this band are one to watch. They have recently recorded their full-length debut album - Reggae Dancer - at CAAMA Music to be released later this year. 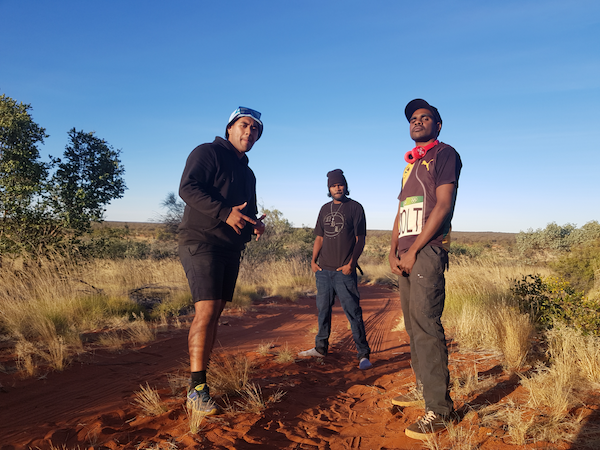 Hailing from Ampilatwatja, Desert 7 is a Hip Hop group comprising of Preston Payne, Cleveland Holmes and Stephen Unuka. They first started recording in a car, then moved to an open shed, and now in a shipping container with power to record in. It gets really hot in there due to no air-conditioning but that doesn't stop them from recording, making great music, and having fun. "Our music says a lot about who we are and where we come from what we do and where we are now" - Stephen Unuka 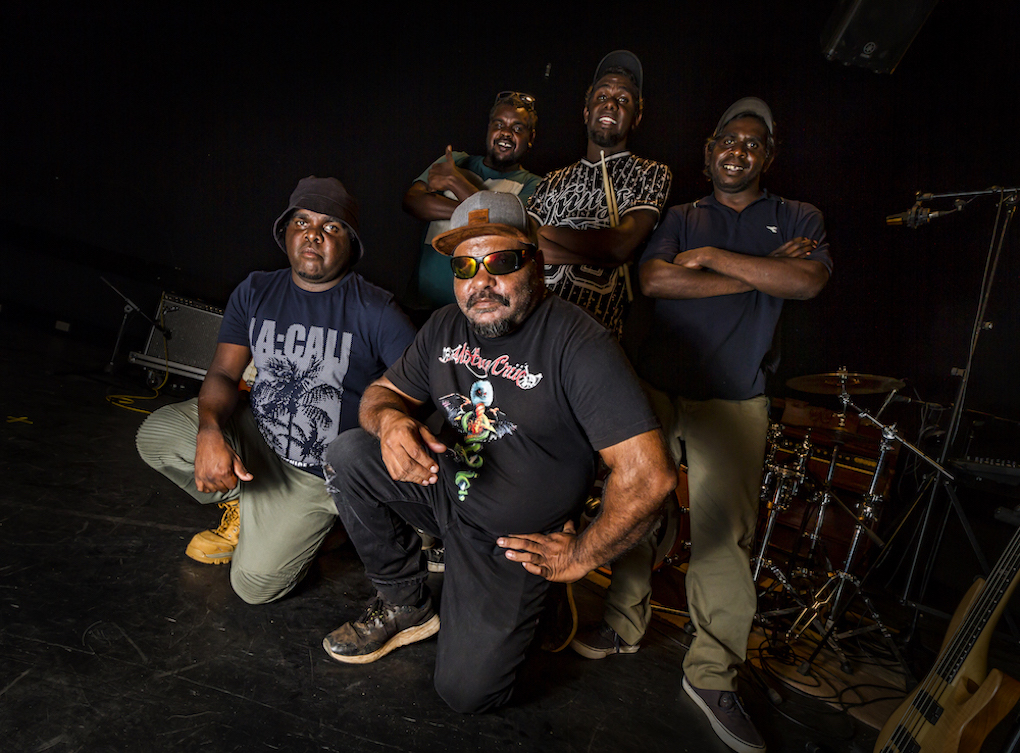 Jonathan Doolan and the Areyonga Band are from the community of Utju (Areyonga) 240km west of Alice Springs. It is made up of lead vocalist Jonathan Doolan accompanied by talented multi-instrumentalists, Rufus, Francis, Stephen, Lowen and Lowrence. Singing in both English and Pitjantjatjara, this band has an upbeat rock/reggae vibe and and their high energy performance is great for the dance-floor. 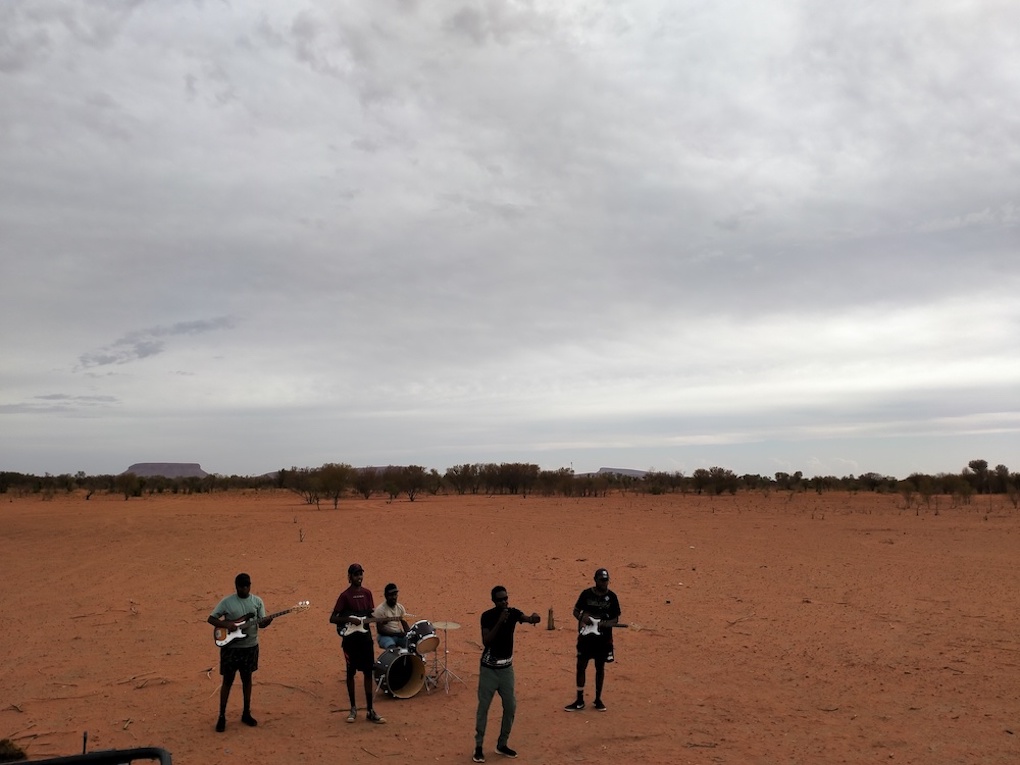 Karrku is a mountain located in the Central Australian desert community of Nyirripi and is well known in the Tanami Desert for its red ochre, used often for ceremony. Karrku Reggae Band were formed in Nyirripi under their namesake Karrku and sing a mix of desert rock/reggae in their native languages of Anmatjere and Warlpiri. Made up of Derek Roderick on lead vocals, Jezeniah Turner on bass, Matthew Gibson on Rhythm Guitar and Kieran Michaels on drums 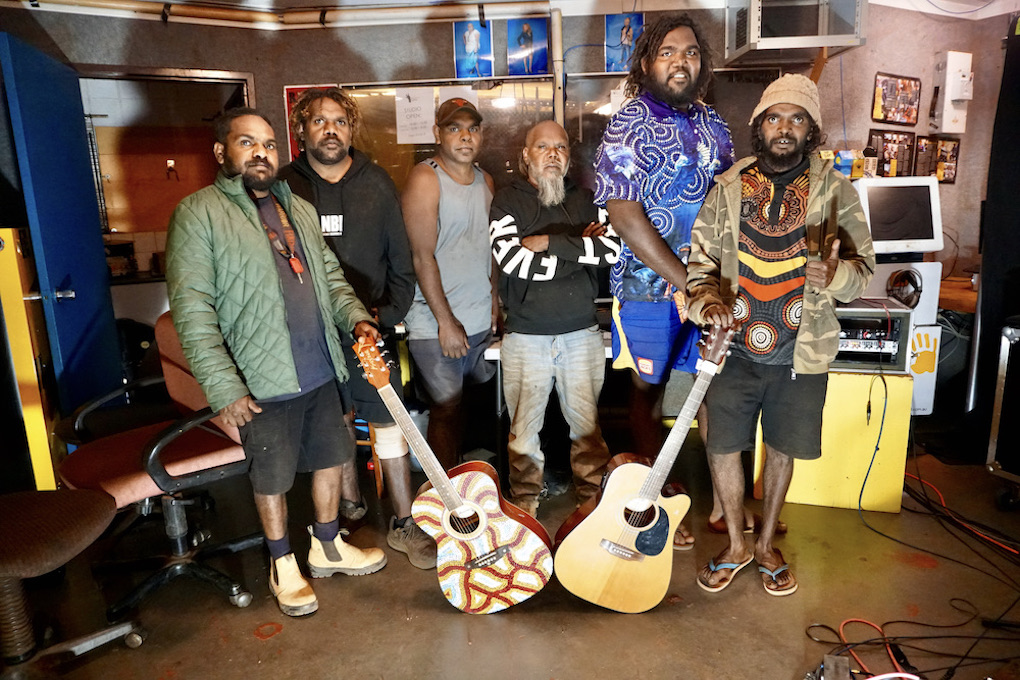 Dixon Bell tells the story of Moonlight Reggae band: "We MOONLIGHT REGGAE BAND (sometimes called Wanarn Sunset band) from Wanarn Community on the Ngaanyatjarra Lands, WA. It’s just a small community and you’ll see on the map, we just a small station in the middle between Warakurna and Warburton/Mirlirrtjarra.

Dixon Bell, Junior Isaac Bates & Milton Reid was little in Wanarn. Those older musicians, our families – Alistair Reid, Keith Richards, Ryan Richards, Delray Ward, and my other cousin-brother Quinton Burke (deceased) & Tim Jackson – we watched them and they learned us how to play music. They said to Isaac and Milton: ‘come and play this piano, and try to sing’. So now Isaac and Milton are the singers and I, Dixon, play the keys. We take it over now, in their spot” 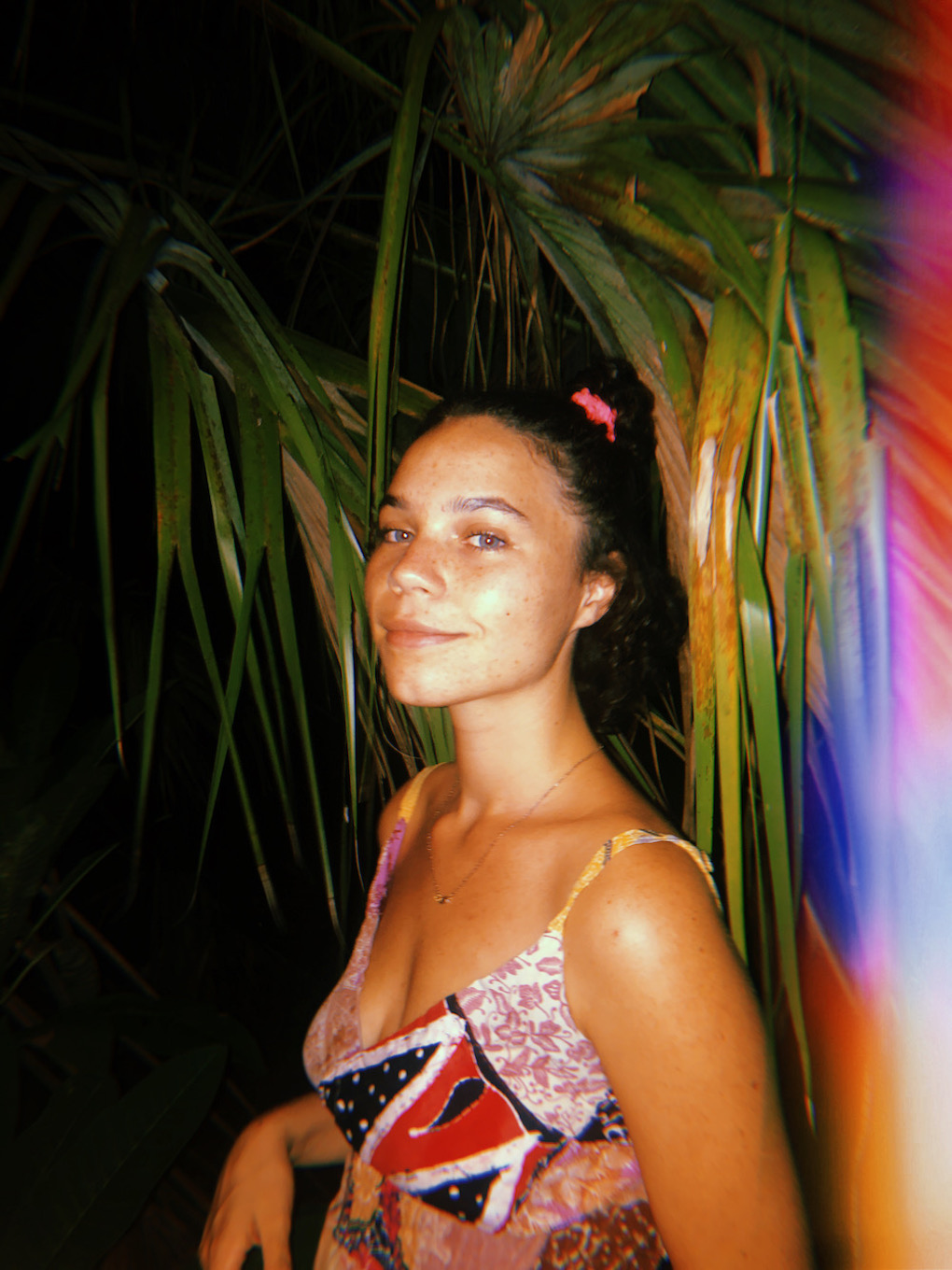 Ray Ray is a, Anbarra/Diyama and Nakara young MC and creative visionary from the Maningrida community in west Arnhem Land. She also has connections to the Lurritja clan of the central desert and Yumatji mob through her mother’s side. Ray Ray is committed to spreading positive and powerful messages through her original material ranging from hard hitting rap lines to soft angelic spoken word. Combining the essence of RnB, soul, reggae, blues and rock - bringing you a truly amazing fusion of sound and unique musical experience. 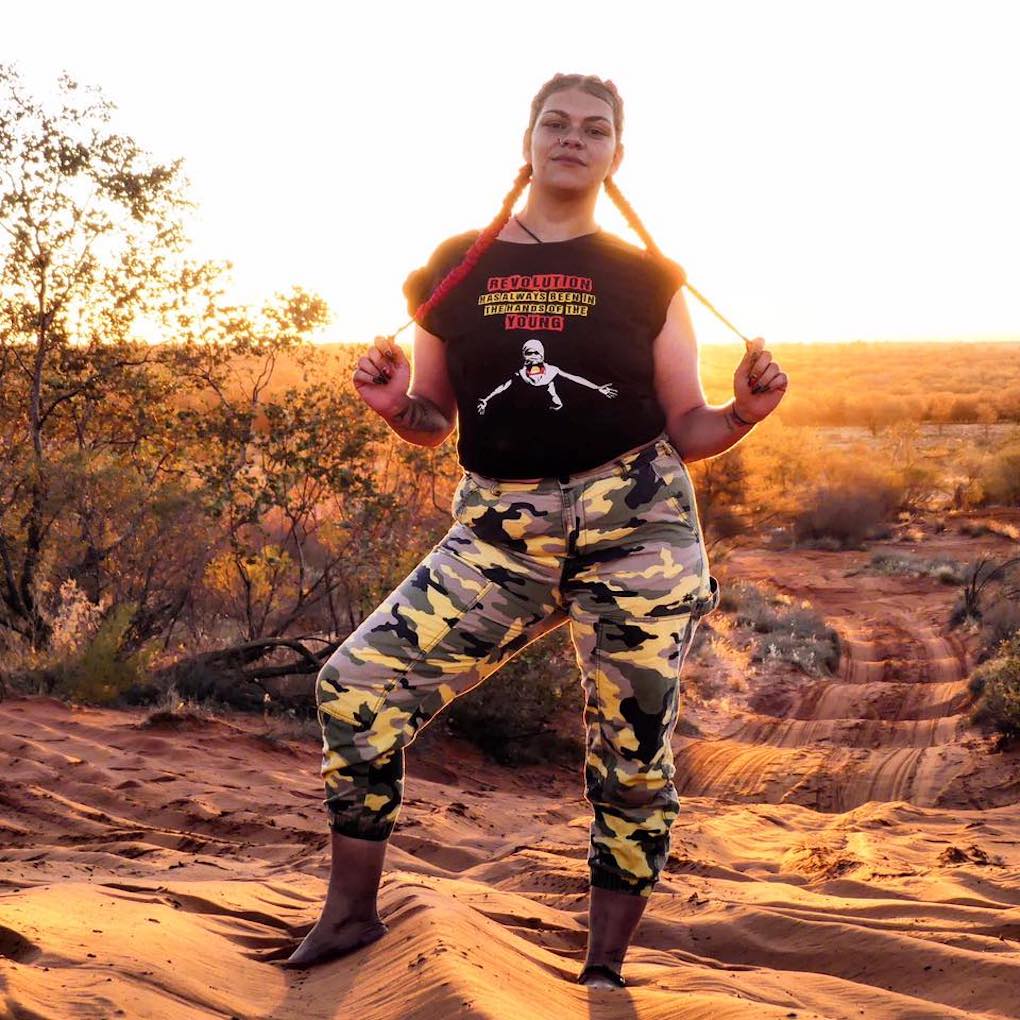 Kirra Voller is a singer/songwriter and proud Wirangu/Kokatha woman who lives on Arrernte Land in Mpartwer (Alice Springs). One of the original participants in MusicNT's very first Divas program 11 years ago, Kirra has since gone on to deliver this program to the Darwin region and Barkly region, mentoring many First Nations women and helping them build confidence, create songs, find their voices and places within the growing NT music scene. Her voice is warm and earthy, strong and at times subtle. While you can tell her influences are broad, this small snapshot of what she's capable of leads you to believe that her most powerful songs connect with just a guitar, some strings and her voice.