Getting Music by NT Women “Out There” and Being Heard

Many respondents commented on the difficulty in getting NT music heard and “out there.” Once again, this is an issue which affects all NT artists but disadvantages women further given concerns around rarely being booked as headlines or session musicians, the lack of NT women’s music on radio and the greater costs women often need to meet when gigging or touring. There is clearly no lack of talent across the NT, including from our female artists.

Even in Darwin where we have some artists who are nationally and in cases internationally recognised, they can still be disadvantaged. We don’t have the options performers based in Melbourne or Sydney have. The costs are huge, especially if you have a family. Grants don’t factor in extra costs for women touring.

The issue of geographical isolation and living in small communities was raised during MusicNTs 2020 online industry workshop series. The massive positive of living in a small community is that people tend to share and to collaborate more. The negatives are that there are limited opportunities and there is definitely a ceiling on those available, even in Darwin or Alice Springs. NT artists, especially emerging acts, need to tour (when COVID possible) yet this is expensive and has additional barriers for many women.

Touring nationally is a critical step from emerging to becoming professional and gaining a national profile. It brings great experience in working with new and big venues, having different support acts, top notch audio engineers and so on. ArtsNT seems to support projects happening in the NT and employing NT artists and arts workers here - this works to build up programs or projects but does not support touring.

An interstate commentator mentioned that the Alice Springs live music scene is really held back by its lack of a great band room and live music venues where interstate acts can come and strengthen connections between Alice and the rest of Australia.

This is true of many of our smaller towns and communities and has implications generally across industry.

One respondent commented that The Music Touring Program delivered 50% of its tour to developing female artists over the five year period it existed in (a) Partnership (between) Artback NT and MusicNT. It also enabled women with kids to tour including providing separate transport to current breastfeeding mothers. (It) planned tours suitable for established experienced artists and those less so. Clearly there is a need for more programs like this.

One Tour this program supported in 2018 enabled 4 of MusicNTs Divas alumni to tour the Territory with support from two highly experienced female/non-binary event managers and sound engineers, including performances at a range of remote community festivals and the Darwin Railway Club, and workshops for women and girls in a number of locations. One of the touring artists was breastfeeding and the tour managers accommodated her bringing her baby with her. Another required dialysis every two days which was also built into the schedule. Having organisations prepared to work in partnership and to accommodate the reality of female and Indigenous artist’s lives is critical. 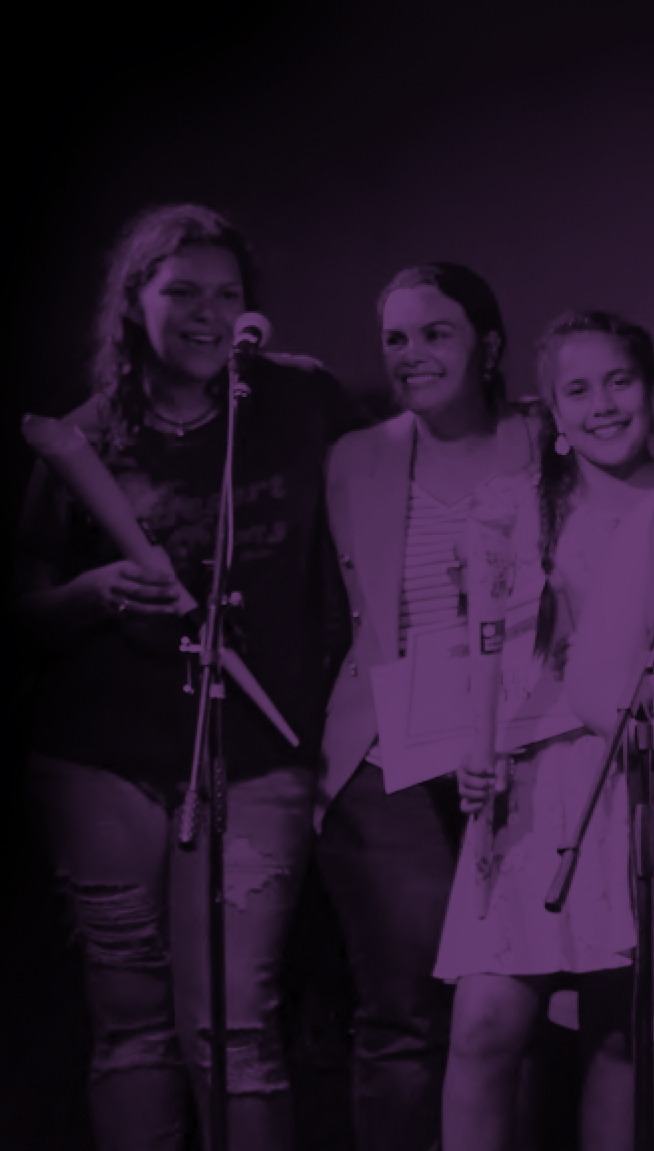 Cultivating Support For Women’s Music Within the NT

There were more questions than answers around how to cultivate greater support for women’s music WITHIN the NT. As one participant put it, when you look at the overall “branding” for NT music and if Territory Sounds (Top 40 Countdown) or FreshMiNT playlists are anything to go by its playful, Darwin/Top End heavy, “blokey” – we know our musicians are far more diverse than this.

Another commented How do we create the strong following that bands have (especially in/from remote communities) for other genres of music?

It’s recommended that strategies for “growing audiences,” especially for music created by women, be investigated further and included in our Live Music Strategy.

Media Portrayal of and by Women in Music

One group was concerned that young women are not receiving training or mentoring in how to use social media, especially around digital safety. MusicNT is also aware of high levels of cyberbullying between young people. It's recommended to follow up and see if safety online is taught in schools or through youth or mental health services.

We need to get back to supporting and valuing the music not the age, commercial viability, look or gender of the artist or group.

The observation mentioned previously in the report section on “Ageism” about a female artist getting more likes for a “sexy photo” than for her music is highly relevant and demonstrates fundamental gender inequity within the NT industry. As another participant noted, equity would mean that having all female bands should become a new 'normal', and not a situation to be gawked at. A number of respondents commented on the need to promote valuing music without appeasing industry groups and the push back from some artists. That female artists even have to think about this in the first place is further evidence of the casual sexism which still permeates through industry.

Girls need to think through the brand they are building up, distinguish between their personal and their artist pages and manage both. Part of this is understanding what can be done through photoshopping and how images can be sexualised in unintended ways along with how girls are being bullied, harassed, and potentially preyed upon through this.

5.1.1 Launch this Strategy in key locations as part of celebrating International Women’s Day 2021 and include live original music by women. Make this an annual event including progress updates

5.1.2 Include a focus on women and gender diversity within broader industry discussions about increasing exposure, touring and promotional opportunities for NT musicians

5.1.4 Encourage more women to contribute to playlists and collections like FreshMiNT and to submit recorded music to AMRAP

64. MusicNT to promote and Launch this Strategic Plan as part of celebrating International Women’s Day 2021 and report on progress against key initiatives annually thereafter

65. MusicNT to ensure broader industry discussions or workshops around exposure, touring and promotional opportunities for NT musicians include matters of relevance to female identifying artists

66. Industry to provide greater encouragement for female identifying artists to participate in or apply for funding, sponsorship, workshops, competitions and other opportunities

67. Industry to provide greater encouragement for female identifying artists to contribute to playlists like FreshMiNT and submit recorded music to AMRAP

5.2.1 Set up and ensure women have equitable access to a shared touring infrastructure that includes:

• tour bus with gear if needed

• stage bus or know how to find one

• capacity to tour with compatible bands/acts

69. MusicNT to investigate women’s touring opportunities as part of the Live Music Strategy

71. Advocate with funding bodies for greater support for women to tour

Improved media landscape where women and girls know how to use social media and control their “brand” (see also Aim 3.4)

5.3.2 Advocacy with the NT Education Department to ensure digital safety is included in the curricula

5.3.3 Advocacy with youth groups and employment providers to include digital safety in “life skills” and Language, Literacy and Numeracy type programs

74. Advocate for digital safety workshops to be included in school curricula and routinely provided through youth and employment programs